Working as a Drone Pilot

I often get asked “how do I work as a drone pilot” and “how much work is there in the UK as a drone pilot”. I was asked these questions and a few similar ones recently by top online magazine UK Hillwalking and here is the article that they put together that has been published today: http://www.ukhillwalking.com/articles/page.php?id=7430

Here is some of the article:

Drones are everywhere these days, making spectacular aerial films at modest budgets. North Wales-based Rob Johnson is a well known MIC, but he also has a sideline flying drones to capture film footage in the mountains. Earlier this year Rob gained national media coverage for his new business Film Up High with an amazing film of a snowbound Ledge Route (we’ve saved it for the end of this piece). So how do you go about learning to fly a drone, and what official bits of paper do you need to make a living at it? We thought it was high time we asked Rob about the attractions and challenges of working as an aerial photographer using drones.
How long had you been working in the outdoors before you started as an aerial photographer using drones; and when did you get into the latter?

I have been working in the outdoors since 2001 and full time as an MIC since 2009 through my company expeditionguide.com

I started using drones in 2013, inspired by a Mammut film where they used a drone to show climbers on what I think from memory was the Trango Towers. The aerial view was just jaw dropping and I wanted to do the same! I started off filming some of the courses I was running. My first film was my Classic Scrambles week where I filmed on a GoPro during the day and then went back up each night to film the routes from the drone. It was knackering but I was really pleased with the results at the time. Now it looks pretty poor, I had just bolted a GoPro to a drone so there was no stabilisation and the camera was shaking all over the place – it had a wow factor though because people hadn’t seen that perspective before.

It’s still quite a new field – what gave you the idea that it could be possible to make a commercial venture out of drones and cameras in the mountains?

I was getting enquiries from production companies who had seen my “Year in the Mountains Films”
It seemed that they were keen to use the footage or hire me to get similar stuff so I decided to take the plunge and invest in the qualifications, a professional drone and a new camera. It meant a big bank loan but I hope it’s an investment in the future and by getting in at the start of a fairly new industry I hope to get established early on.

The drone filming came about as an extension of my filming in the mountains using GoPros and DSLRs – it was just another way of showcasing the beauty of the mountains but from an entirely new perspective. I have never been into RC helicopters or anything like that so I have had some fun along the way learning to fly – especially with the turbulence of mountain flying – but I am really enjoying the challenge of learning new skills and being creative at the same time.

Roughly how much proportion of the skill is in the filming, and how much is flying?

I think that lots of people can fly these things – there is all sorts of rubbish on YouTube. The skill is in still being able to frame a nice image and then add something to that image by being in the air and adding the element of movement. When I first started I quickly realised that it was easy to make films to sell drones – lots of aerial footage that is impressive for being aerial footage – but the real skill comes in using the perspective to add to the story of the film. Good aerial footage will be edited into good traditional footage without the viewer even noticing, it will just add to the overall package.

On a related note – just how hard is it to pilot these things in the mountains?

Things get a lot more tricky with mountain flying. Take off and landing is much more difficult and I tend to use catch landings which is really exciting with the big hexacopter and needs two people to achieve. The air turbulence is very different in the mountains, I have to be aware of strong downdrafts and updrafts and it takes the right weather for me to be able to fly. It can also be a challenge getting all of the kit into location in the first place, it’s all still pretty heavy and needs a lot of battery juice. I hope things will get easier as technology improves, cameras get lighter and batteries more efficient.

Are you more weather-dependent than you would be filming on the ground?

Yes definitely. I need it to be dry and to have wind speeds of less than 20mph.

And what are the main challenges of the flying/filming combination?

At the moment the challenges are the weather, managing risk to people and property and battery performance. I have to go through comprehensive pre-flght planning and risk assessments for every flight, I am bound by CAA regulations and air traffic restrictions and batteries will only give 10-15 minute flight times. That means carrying lots of batteries and being really well organised in the flight planning.

Here’s a summary of the process for those interested in gaining a qualification to use a drone/quadcopter/SUSA commercially here in the UK:

1. Identify what you want to do and what drone/multi rotor best suits your needs. I started with a DJI Phantom and now have a Phantom 2 and a DJI S900.
2. Learn to fly. You can do this via a flight school or you can teach yourself. You will need a big open space though and permission from the landowner. It’s worth joining the British Model Flying Association so that you can access insurance for public liability and areas that you can fly. (We will be providing flight training courses here in North Wales in the next few months so keep an eye on our website www.filmuphigh.com)
3. Choose a qualification. As of 12 February 2015 there are four NQEs that have CAA approval: EuroUSC Ltd; Resource Group Ltd; Rheinmetall Technical Publications UK Ltd (RTP-UK); and Sky-Futures Ltd
I chose the Resource Group but wouldn’t recommend them. The package cost £1600 and the customer service was pretty poor throughout the process.
4. Pilot Competency Flight Assessment. This is the practical element of the qualification where you are tested on your operating procedures and your ability to fly including dealing with emergency scenarios. You will need to be insured for the flight test for public liability, professional indemnity and accidental damage cover.
5. Get your operations manual verified and apply to the CAA for a permission for aerial works. Your insurance will be invalid without this permission and you will need to work under the CAA Guidance that legislates the use of Small Unmanned Aircraft.

Is the training as long and expensive as many people probably imagine?

In total it took me four months from start to finish and cost about £2000 for the training and the CAA application fees. That’s without buying the drone and camera kit.
What sort of jobs have you been doing since you got the business up in the air?

I have done some fairly diverse work from working on a project for the BBC on the retirement of the Sea King Helicopters, or working for Slackjaw Productions filming the Dragons Back Race, to a job in Chester for the University to promote the opening of a new building.

Is there such a thing as a ‘typical’ day filming in the mountains – if so, can you briefly describe it?

Much of the time is spent in the preparation. I start a few days before by doing my pre-flight assessments. This includes air traffic searches and notifications, a pre-flight survey & risk assessment and drawing up flight plan ideas based on the client’s shot list. On the day I need an early start to get all of my kit into location and set up whilst I do my onsite survey and pre-flight checks. The filming is the easy part! I will brief any actors that are involved in the shoot, do a walk through and work with the producer to make sure we get the shot they want. I have full HD downlink so we can see what the camera sees in real time and I can control the camera separately to the drone so will normally have a second camera operator with me. I have been working with IFMGA Guide and Photographer Andy Teasdale on some recent shoots.

Once the shots are in the bag its a case of packing all the kit up, walking back to the road and backing up all of the footage. Then I head home and start the process of re-charging all of the batteries – it’s a longer day than instructing!

Do you think we are reaching drone-film-in-the-hills saturation point now, or is the sky still the limit with it?

There are only about 400-500 people in the UK who have been CAA Licensed and Approved so if it’s only the qualified people that are flying commercially we shouldn’t be over-run by drones in the mountains, and those that are flying should do so responsibly. I have the following environmental policy to minimise my impact on peoples enjoyment of wild spaces:

Drones and UAVs offer an environmentally friendly alternative to a helicopter, however they can still have an impact on our environment. We appreciate that people visit beautiful, wild places to escape the noise and pollution of modern life in our cities and make the following pledges:

We only use electric motors to minimise pollution and noise
We try to avoid flying in popular beauty spots, mountains and crags at weekends and bank holidays
We will not fly within 150m or directly above any congested area without special permission
Wherever possible we will fly/film in the early morning or late evening when places are quieter
We will not fly within 50m of anyone without their permission
We will listen to concerns expressed to us in person when flying and take any necessary action to avoid disturbance.
We will only use CAA licensed and approved pilots

It’s already had thousands of views, but in case there was still any question what can be achieved filming with a drone we can’t resist ending with Rob’s Ben Nevis footage from last winter:

About Film Up High
Rob has been flying drones since 2013 and making films for about 6 years, combining the two with his business Film Up High that provides stock aerial mountain footage, a complete film production service and Rob’s services as a CAA Approved freelance drone pilot and cameraman. 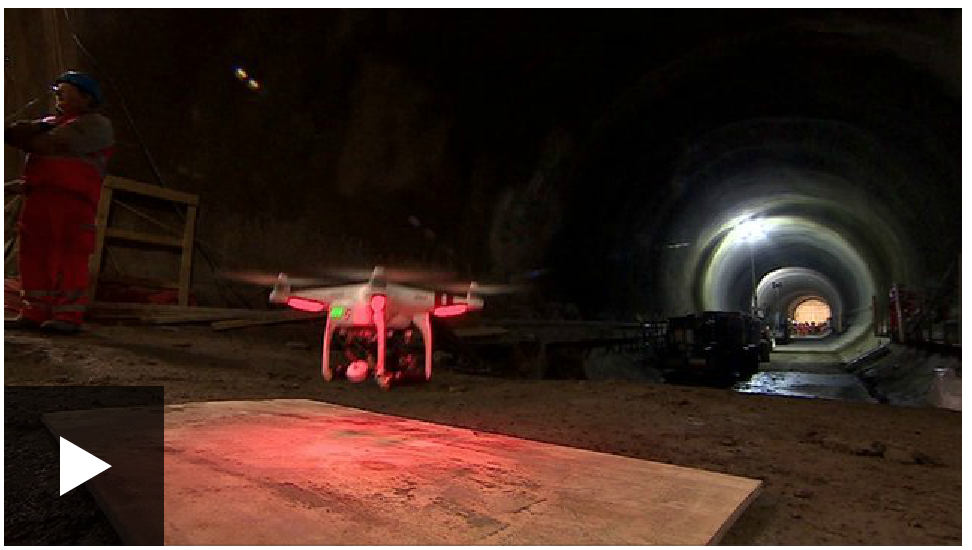 BBC Footage
The BBC have been using a DJI Phantom (the smaller of the two platforms that we fly) to get some great footage through Crossrails tunnels....

New Film on the big screen
I popped into the Ogwen Visitor Centre in Cwm Idwal this afternoon, just in time to see our new film make its debut on the...